Since the earliest of times, this estate has been used as a residence for Saxon nobility. A manor house was first mentioned at this location in Röhrsdorf in the 14th century.

The first notable owner was Rudolph von Neitschütz from 1649- 1682. Neitschütz served as a general in the Royal Guards of Saxony. His daughter, Magdelena Sybille von Neitschütz, grew up in the house and later became the mistress of Georg III, Elector of Saxony. Her famous life and early death has been the subject of several books and a recent TV movie in Germany.

The next owner was Christoph Vitzthum von Eckstädt in January 1668 he married Johanna Helene, the second daughter of Rudolf von Neitschütz. They had 17 children.

” The property will offer musicians and artists a unique location in which to record, write, stay and create. With it’s exceptional historic location, this property will be uniquely positioned as a experience destination for artists from across Europe and North America. “

In 1741 Carl Adolph von Carlowitz took over the ownership of the castle. Because of the friendly relationship between Carlowitz and the Saxon king Anton the Benevolent (1827-1836), members of the Saxon royal family were frequent guests at Castle Röhrsdorf.

In 1771 the Park in the Röhrsdorfer ground was developed and 1787 was the Orangery building was constructed in the park with the sculptures “Bacchus” and “Flora” by the noted Dresden sculptor Gottfried Knöffel.

After a major fire, the castle was rebuilt and the tower added in 1890. Until the end of the Second World War in 1945 the Castle stayed in the possession of the Carlowitz family. It is rumoured to have been the site of many meetings of anti-Nazi resistance groups through the latter part of the war.

After the war the castle was taken over by the Soviet Red Army and went into public property in 1948. From then until the German reunification in 1989 the Castle served as a school for agriculture. In 1970 the statues were removed from the park and relocated to Gut Gamig. They have since gone missing.

In 1999 the castle was fully renovated into a 3 star hotel and restaurant. In 2001 the hotel went bankrupt and stood empty until it was purchased from the bank by David Krysko, a Canadian businessman and co-founder of Club Penguin. 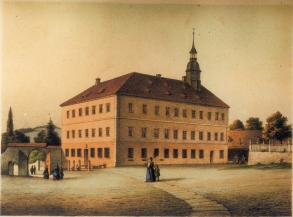